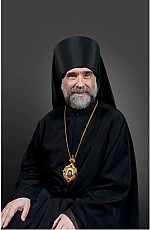 
The son of Ann (Rosics) and the late Peter Dahulich, Archbishop MICHAEL was born in Johnson City, N.Y., on August 29, 1950. He grew up in Binghamton, N.Y. He was baptized in the Orthodox Faith as an infant at St. Michael’s Church in Binghamton, where his parents had been married in 1948. His father was a convert from the Byzantine Catholic Church, while his mother was cradle Orthodox. Michael’s mother, together with her parents, nurtured him in the Faith by their example, and his mother read to him Bible stories and the lives of the Saints from his earliest childhood. Fr Joel was born in Cambridge, MA, but moved shortly thereafter to Indiana, settling in Southeastern Ohio while he was still a young child. He was received into the Orthodox Church at the age of 8, along with his parents; previously the family had been members of the Religious Society of Friends (Quakers). He grew up nourished on the beauty of the Church's teachings and worship and the lives of the Saints, and gradually realized a sense of vocation to share that beauty with a world desperately in need of it.

He studied philosophy and psychology at Malone University in Canton, OH, and attended St Tikhon's Seminary in South Canaan PA, where he graduated with an MDiv in 2015. He was ordained to the priesthood in January of 2017, and assigned to Holy Apostles in Lansing in February of 2017. During his time at Holy Apostles, he has also served the Church as an instructor in the Diocesan program for diaconal vocations, and as a chaplain at the Diocesan summer camp.

Fr Joel lives with his wife Meg (Margaret) and their three children on a small "homestead" near Freeville, NY.